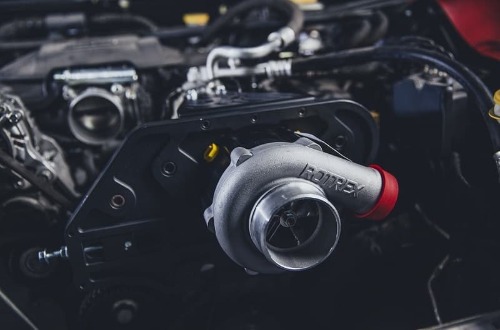 Your foot is only a few inches from the accelerator. You feel the gentle vibration of your car’s engine resonate through your entire seat. And the hairs on your skin rise in excitement.

You’ve just boosted the horsepower of your engine. And you’re about to experience the incredible thrill of driving a turbocharged car.

Well, at least you want to experience it. It’s why you’d like to know how to add horsepower to a car. One question sticks at the forefront of your mind, though — just how much hp does a turbo add?

Here, you’ll get all the answers you’re looking for. But before we dive into that, you need to know a little about how turbos work.

A Quick Lowdown On How Turbochargers Work

An engine produces more power when it does 2 things:

For fuel to burn and produce heat, it needs a supply of air. Well, more oxygen in the air than the air itself. So if an engine needs to generate more power? It needs to be able to take in more air to burn more fuel, faster.

This is where turbochargers (and superchargers!) come in. A type of forced-induction system, this device forces air into your engine to burn more fuel.

And here’s how it does it.

A turbocharger is always close to the stock engine, where cylinders fire out the exhaust. These rushing exhaust gasses then spin a turbine within the turbocharger.

The turbine, moving at speeds of up to 150,000 rotations per minute (rpm), powers a compressor. This compressor then draws in air and pressurizes it. Blasting a lot of it into the engine in the process.

With this, there’s more air in the engine. Which means it burns lots of fuel. Which means you get greater power from the same engine.

Now you may be thinking all this spinning and blasting could be bad for your car. But that’s just the thing. A standard turbocharging system has components that account for this.

There’s an intercooler that reduces the compressed air temperature… before it enters the engine. A wastegate to reduce air pressure if it gets too high.

What About An Aftermarket Supercharger?

Well, first, turbochargers and superchargers both boost horsepower. They do so by bringing more air into the engine. The difference arises when you look at how they do it, together with the pros and cons.

As you already know, a turbine in the fiery exhaust stream of the engine powers a turbocharger. But for an aftermarket supercharger, its air pump connects directly to an engine’s crankshaft. This spinning component then powers the supercharger.

And it’s here that the pros and cons lie. A turbocharger needs a moment for the exhaust to build up enough to spin the turbine. This is turbo lag (which we’ll talk more about in a second).

It doesn’t work this way for an aftermarket supercharger. Because the crankshaft is always spinning, the boost in power is immediate. But where a supercharger fails is in fuel efficiency.

Since it uses the engine’s power to spin, it uses up a lot more fuel than an engine without a supercharger.

So if you’re a dragster all about instant acceleration–go for the supercharger. But if you want power, while still caring about fuel economy–a turbo is your best bet. Now that’s out of the way, let’s get to your burning question.

How Much Horsepower Does A Turbo Add

The answer to this question isn’t cut and dry. (And if you also have the question “how much hp does a supercharger add?” This answer is for you, too.)

Normally, a turbo will provide a boost of about 6 to 8 pounds per square inch (psi). Normal atmospheric pressure is 14.7 psi at sea level. This all means you’re pushing about 50% more air into your engine than usual. Which all equates to 50% more power.

But in nature, no machine is perfectly efficient. In the case of turbochargers, the power that spins the turbine itself is a cause of inefficiency. This is because that power doesn’t come for free.

This is because the engine has to use its power to work against something called back pressure. Backpressure here is a result of the turbine restricting the smooth flow of exhaust. So how much power do we have left? We’re looking at an added power of about 10 to 40%.

That’s not to say this can’t go higher. Some turbos can add the power of as much as 100%. For this to happen though, the fuel injection system of the engine will need an upgrade.

Pro Auto Thought: There are instances where you might be tempted to attach or upgrade a car exhaust system to complement your turbo-charged vehicle — How To Make Exhaust Louder.

How Much Horsepower Does A Turbo Add–Number Range To Expect

If you prefer an exact number range to go by, a turbocharger can raise your car’s horsepower by as much as 70 to 150 HP.

How Much Hp Does A Supercharger Add–Number Range To Expect

For superchargers, the range is a little ways below that of a turbocharger. Using a supercharger for your engine will give you a horsepower boost between 50 to 100 HP.

Other Advantages Of Adding A Turbocharger

Massive power gains aren’t the only benefits you can enjoy from a turbo. You also see better throttle response (because they boost low-down torque).

It allows you to replace a bigger engine with a smaller lighter one. Since turbos let the smaller types have about the same engine output as the larger ones. All this comes together to give you a better driving experience and helps you save fuel.

The measurement is either in psi or bar. And values equal how much power you get.

You won’t get an instant power boost when you use a turbocharger. When you first step on the gas, your engine is going to be running at low rpm (revolutions per minute). So the pressure of the exhaust gases isn’t large enough to boost the engine.

That’s because pressure has to take more time to build up to add more power to the engine. A smaller turbocharger will have a much shorter lag time.

But in a monkey-paw-like fashion, a smaller turbocharger comes with a pretty significant disadvantage. At higher engine speeds, they won’t provide the boost you’re looking for.

This is because, at higher speeds, there’s a lot of cold air intake into the engine. Sometimes more than the small turbo can even handle. This can lead to another danger: the turbine spinning too quickly. And that in turn can lead to overheating.

The Drawbacks And Dangers Of Installing A Turbocharger

A big drawback that comes with using a turbo is complexity. The numerous parts you add to your engine raise the chance of something breaking down the line. This is especially the case when you’ve got more than one turbine.

And as if that’s not enough, the cost of maintenance can be a lot demanding and expensive. Because a turbocharged engine requires specialized training and experience.

One danger to keep in mind is the stress a turbo or supercharger bears on an engine. This can wear your engine out faster, shorten your car’s lifespan, and subject it to sudden breakdowns.

But that’s only one of the risks you need to be aware of. The other is engine knocking. As the turbo’s compressor raises the pressure of the air, the temperature also increases. This can go far enough to ignite the fuel before your spark plug fires. And knocking happens.

To prevent this, you’ll need to use higher-octane fuel for your car or you’ll need to reduce the compression ratio of your engine (more on this in the next section).

How to Add Horsepower To Your Car – Installing The Turbocharger

You need to try priming your engine to withstand extreme pressures and temperatures. This means you may need to replace your stock pistons, connecting rods, and crankshafts.

Your best bet is to use replacements made out of aluminum. Not only is it a lightweight metal, but it’s also a durable one. So it helps naturally aspirated engines reach high speeds… while withstanding high temperature and pressure.

You may also need a bigger, better coolant radiator. Since power boosts will generate a lot of heat. Also, consider upgrading your clutch and other transmission parts. Once you’re sure your car can handle a horsepower jump, it’s time to install the turbo.

Install The Turbo Or Supercharger

How much horsepower does a supercharger add? About 50 to 100HP. For a turbocharger, that range goes up from 70 to 150. Although, this is not a limit. It can go higher, depending on how much horsepower your engine can handle.

How’s your ride? Tell us something about it in the comments box and let’s start talking! 😉